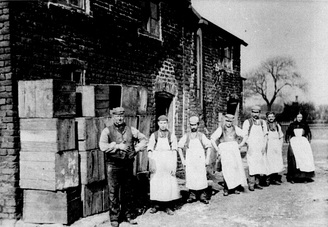 Former pipe shop on library site. ©National Museums Liverpool
Rainford library is the former site of a public house and a clay tobacco pipe shop where people produced clay pipes for local and regional use. Between the mid 18th century and the early 20th century a number of individuals and families occupied the site for commercial pursuits. By the 1910s the production of pipes at the site had ceased and the buildings fell into decline, eventually being demolished and the current library being built in the 1950s. A site survey was carried out by Lancashire County Council in May 1954 for the proposed construction of the library. They recorded the chimney stack and the excavation of the foundations and underground flues. This pipe shop was one of a great number in operation in and around Rainford at this time. 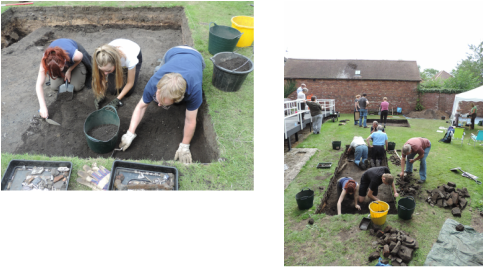 Volunteers on site. ©National Museums Liverpool
The Rainford’s Roots team carried out an excavation at the site in August 2013 and retrieved a lot of material relating to production and manufacture on the site. Local volunteers had the chance to excavate and record the site alongside professional archaeologists. The Young Archaeologists' Club came down for a visit, as well as the local mayor. See our photo gallery for more images from the excavation and open days. 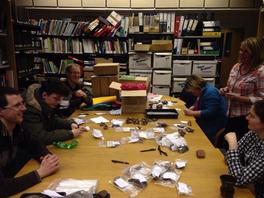 Volunteers after a hard day's finds processing!
Over 8,000 clay pipe fragments were recovered from the site which are being processed and conserved by the team alongside keen volunteers. See our blog for a volunteer’s insight into this detailed process! Clay pipes can tell you a lot about changes in industry and fashion in regards to patterns, decorations and the shapes of pipes being produced. Pipes recovered date from the mid 18th century up to the early 20th century and cover the span of known industrial activity on the site. The assemblage also contains pipes with maker’s marks which can help to identify the individual maker of a pipe.

Pipes and decoration types from the library site: 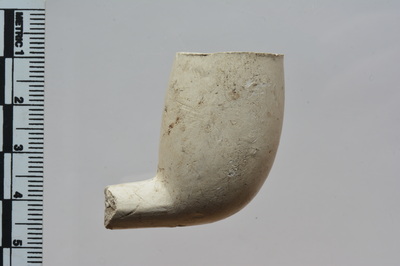 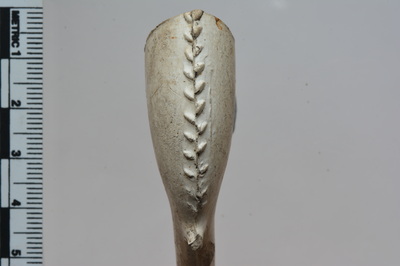 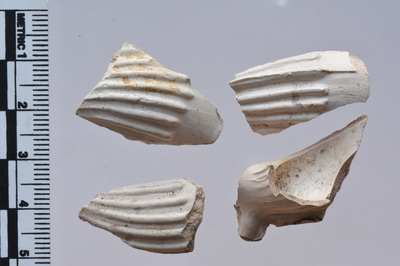 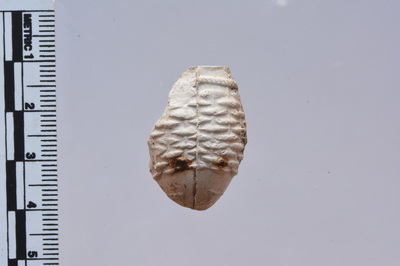 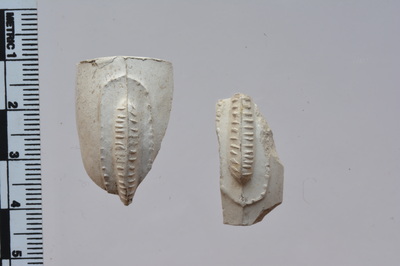 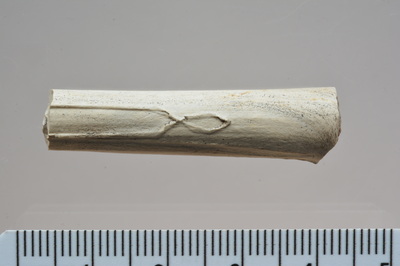 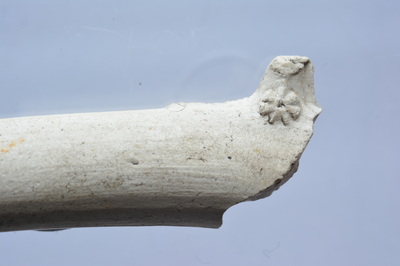 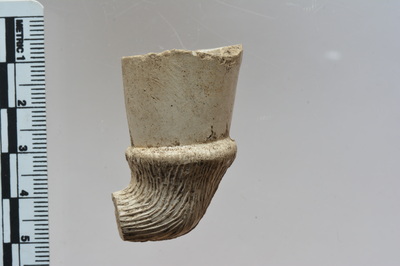 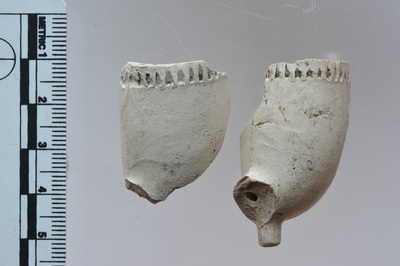 Clay tobacco pipes were made in huge numbers through the industrial period and were discarded frequently as they broke very easily. Rainford was a significant cottage industry for the manufacture of clay pipes from the early 17th century and a large quantity of pipe fragments have been discovered through chance finds and professional excavations in the village.

There are three main parts to a clay pipe: the bowl where the tobacco is placed, the stem, and the mouthpiece (see image below). Stems are the most frequent item to be found as some pipes were up to 20 inches long and broke into many pieces! The majority of pipes found at the library site consisted of plain pipe stems, but a number of bowls and mouthpieces were recovered, including glazed or shaped mouthpieces and decorated bowl fragments. Most unfortunately were incomplete due to disturbance and building work on the site in the 20th century. 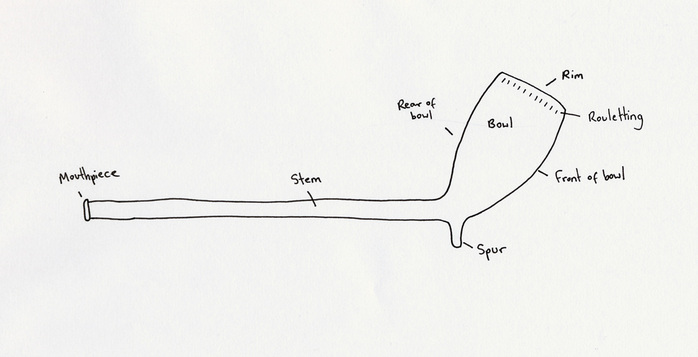 What have we been finding? 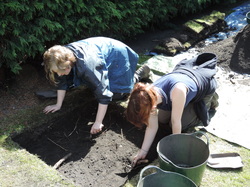 Volunteers digging a test pit. ©National Museums Liverpool
Volunteers have been working with the Merseyside Archaeological Society and National Museums Liverpool on researching and excavating garden sites in Rainford village. Recent investigations on Church Road have uncovered post medieval industrial material associated with the manufacture of clay tobacco pipes and pottery in the village from the 16th century onwards. Finds have included vessels and fragments of pottery from 16th-20th century in date, 17th century clay tobacco pipe bowls stamped with maker’s marks, locally produced bricks and tiles, and local glass.

Previous activities that took place in the village can be identified from the material remains left behind. One site in the village contained a significant amount of butchered animal bones. The house used to be occupied by the local butcher, so it appears he was butchering his own animals at the back of the house!

How do these excavations fit in with the history of the village? 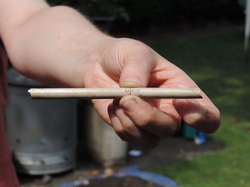 Clay tobacco pipe stem. ©National Museums Liverpool
Agriculture has always been the main means of subsistence in Rainford, which led to the dispersed development of outlying farms and houses. Some farms on the outskirts of the village which have 17th century origins still stand today, many of which included pipe houses indicating that many farmers were also dabbling in the tobacco pipe manufacturing process.

A number of pipe houses and cottages have also been identified in the village centre, which were in production throughout the 19th century. The finding of 17th century clay tobacco pipes in local gardens is the result of this thriving tobacco pipe cottage industry in Rainford which really started to gain momentum in the early 17th century. Uncovering stamped pipes allows us to accurately date the objects and helps to identify the person or people who were manufacturing the pipes.

The boom in the pipe industry was a key factor in population growth and expansion of housing in the village core during the 19th century, which mainly occurred on and around Church Road; the main road running through the village. 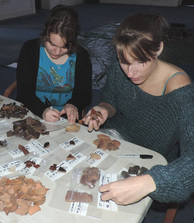 ©National Museums Liverpool
Volunteers have been helping the project by sorting through the large assemblage of pottery and other material recovered from our latest community excavations. Local residents and students have been working at the Museum of Liverpool; washing, sorting, photographing, bagging, and recording the material so it is ready for research purposes and future displays. The assemblage now forms part of the Regional Archaeology collection of Merseyside, held by the Museum of Liverpool.

This work is an ongoing process and anyone is welcome to help out. No prior experience is necessary. If you would like to get involved, please email the project.

Images from garden test pitting projects: (click on the image for larger view) 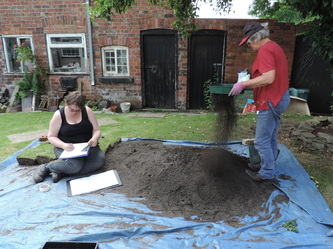 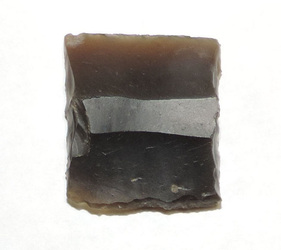 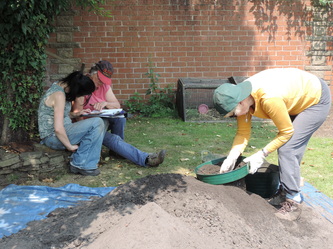 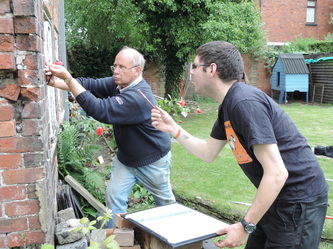 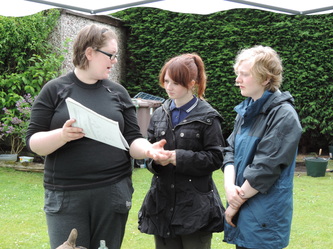 Volunteers being taught how to complete a context sheet. 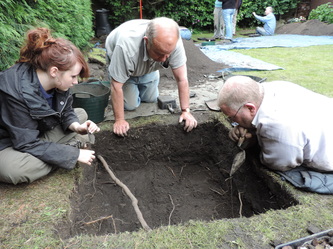 Volunteers digging a test pit.
All text and images are © 2012 National Museums Liverpool.

Volunteers have been involved in a community excavation exploring the site of a late 16th century pottery kiln dump. 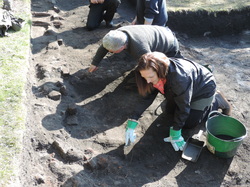 Volunteers excavating trench IV. © National Museums Liverpool
How did we know where to dig?
Test pitting was carried out at a site on Church Road in Rainford in 2011 after the owner discovered an almost complete 17th century cup when gardening. The test pitting uncovered a deposit of late 16th century waste pottery from a local kiln site, dumped into a ditch or hollow following the line of an ancient field boundary along the back of the garden. Images from this dig can be seen in our photo gallery.

The project team carried out a community excavation to investigate the site on a larger scale. In April 2013, two large trenches were opened up to explore the archaeology of the garden, and to recover further artefacts from the site. The team excavated more of the fill from the ditch in the garden and retrieved more post medieval pottery, including a number of almost complete vessels. We also identified a later compact clay deposit filled with kiln waste material which partially sealed the line of the ditch, which has been interpreted as the clay floor to a building or workshop. 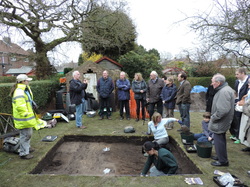 Visitors enjoying a site tour. © National Museums Liverpool
The community dig was extremely successful, both in regards to the evidence and material uncovered, and the local interest it generated. 15 volunteers helped out during the week; some were completely new to the world of archaeology, whilst others hoped to refresh their skills. They were involved in excavating and recording the site, and helped to wash and process the objects. See our blog to hear from our volunteers and see what they thought of the on-site experience! Even the weather didn’t put them off!

Over 70 people attended the open day on Saturday 13 April 2013, where people were invited to see the site and the finds being recovered, as well as talk to archaeologists and volunteers.

Images from the excavation and open day: 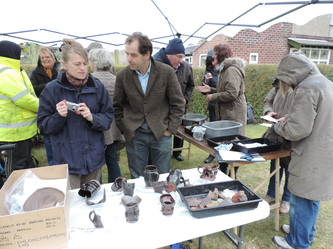 Visitors on the site open day. 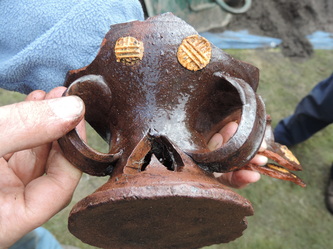 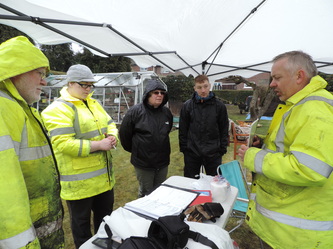 Volunteers learning how to record the site. 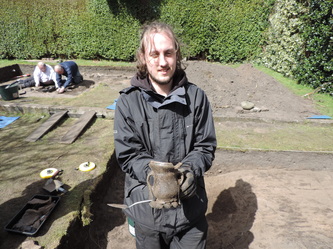 Mike with his 16th century cup. 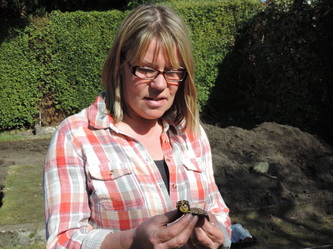 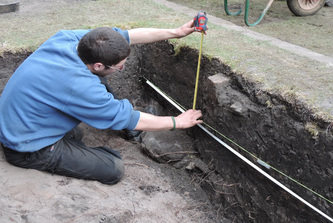 Liam recording a section.
All text and images are © 2012 National Museums Liverpool.